I started watching House of Cards yesterday, and you might be thinking "wow, a post about a TV show? Really?" but seriously guys, this show... it requires so much thinking! Who's backstabbing which platform, etc. It's exhausting and great all at the same time. Plus, I love Kevin Spacey.

Putting aside all the sex and gross older man-younger mistress business, the show really is rather insightful. I could easily believe that there is as much "social politics" as the show suggests. I've watched 7 episodes so far (yeah... I know, I'm hooked.) and there are already a couple of things that pop out:

1) Early on a 59yr old woman gets fired because this cold-hearted business woman (not just emotions speaking, if you watch the show, you'll see, "cold-hearted" is the most accurate word I can think of to describe her) wants to create a new image for her non-profit. Anyway, the woman says a line something like "I'm 59 years old, no one wants to hire me. What am I supposed to do, bag groceries?" The whole scene is troubling for a couple of reasons. First, she's getting fired basically because she's not fresh and young and hip looking. However, her reaction also bothers me. I understand that managing a non-profit is a lot more glamorous than bagging groceries, but I completely believe that (most) all work is honorable. (Sure, there are a couple jobs I think the world would be better off without.) And while the woman may be upset, it's in this moment of frustration that she also reveals her true self. While I am fine bagging my own groceries, I think there are plenty who would look down on doing such a job and yet use that service all the time. It's rather easy to degrade another's work without really thinking how much easier your life is with that person doing whatever job it is. I guess it just brought to my attention that I probably do that too with others' careers and should probably take a moment to think before I cast a judgement so easily. Just some food for thought...

2) There's a main couple in the plot, a congressman and his wife (the cold-hearted business woman). And watching how they interact is just, soul crushing at times. The blatant disregard for loyalty just seems implausible. They have this sort of "open relationship" deal but like, it's really rather disturbing how glamorized hollywood is making it seem. Meh, maybe it's supposed to be shocking. I don't know. Basically, I just see 55-60 year olds acting like their irresponsible college students and I shake my head in disapproval.

3) There is a CRAP ton of deceit and polling who will vote for what policy given what incentive, etc. It's really actually exhausting to keep track of this all. Surprisingly though, it's made me really want to get in there and straighten stuff out! And then I laugh at myself. I guess it's been... 4 years now?... I've toyed with the idea of running for president. I hate politics. The only back I like to scratch is my cat's. And after learning about all that goes on behind the scenes I feel like the president himself doesn't actually do all that much. Where I see I could make improvements would be in establishing a good Cabinet of-- get this guys-- educated experts in the perspective fields and not just putting my "buddies" into positions. But then again, it's often those "buddies" that help fund you to the office. And then I get depressed about losing a race that I am still 15 years too young to run for! Plus side though, I already have the best campaign add ever, thanks Chloe and Tom! (They made this amazing high school graduation poster for me that I've put up on every door of every dorm room I've lived in!) 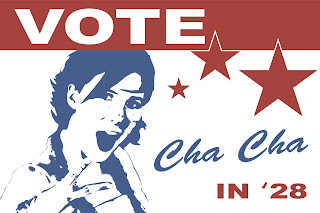 Meh, I've lost my train of thought and am hungry. Gonna go eat now. If this blog post comes up in like 15 years when I run for president, that'd be freaking awesome. I wonder if blogger will even still be around... The future man, prettttty cool times.